Presenting: our hero! Edgar is a 32-year old, well-meaning guy, who has had a bit of a rough time in life so far. He works hard at his job as a window washer – and recently recruited his brother to help him. A dreamer at heart, though, he’s constantly thinking up ways to improve his life situation. Unfortunately, these plans have a tendancy to go awry…in comical ways. Despite his seeming bad luck, however, he’s a very kind and unfailingly optimistic guy at heart.

Hellooooo Nurse!! Sylvia is a Junior nurse at the hospital where Edgar and Wally work, and specializes in pre-operative care. In some respects, she’s very shy, and has never quite figured out how to balance her attractiveness and her intelligence. In her heart, though, she knows that she’s a powerful woman, and really likes to help people. She knows that she’s good at her job, but tends to get nervous around authority figures.

Wally is Edgar’s well-meaning, but very clumsy, younger brother. While he shares Edgar’s good-heartedness, he has a bit of a lazy side. In fact, he’s been known to doze off on the job - which was the problem at with his last two employers. His only degree is from the school of life – but he’s a loveable guy, and wants the best for his brother.

The Boss is not a bad guy, at heart. Really, he’s not! But, in his role as head of hospital facilities, he’s seen a long line of employees come and go in the window-washing and maintenance areas - and he has no more patience for employees goofing off on the job! 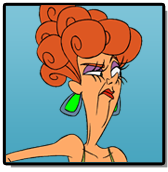 A whole new level of drama queen! Roxy has a short temper, an even shorter attention span, and is almost always running late for an appointment at the beautician. Behind her strong personality, though, hides a delicate and optimistic person just waiting to be discovered! 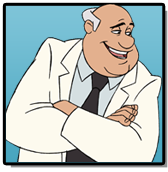 Mischief comes in threes! The three doctors – Dr. Williams, Dr. Hartsock, and Dr. Jain, are some of the hospital’s senior medical staff. Dr Williams, in particular, is a reknowned Orthopedic Surgeon, and responsible for all patient care at the hospital. The trio has worked together for several years, and eats lunch together every day.